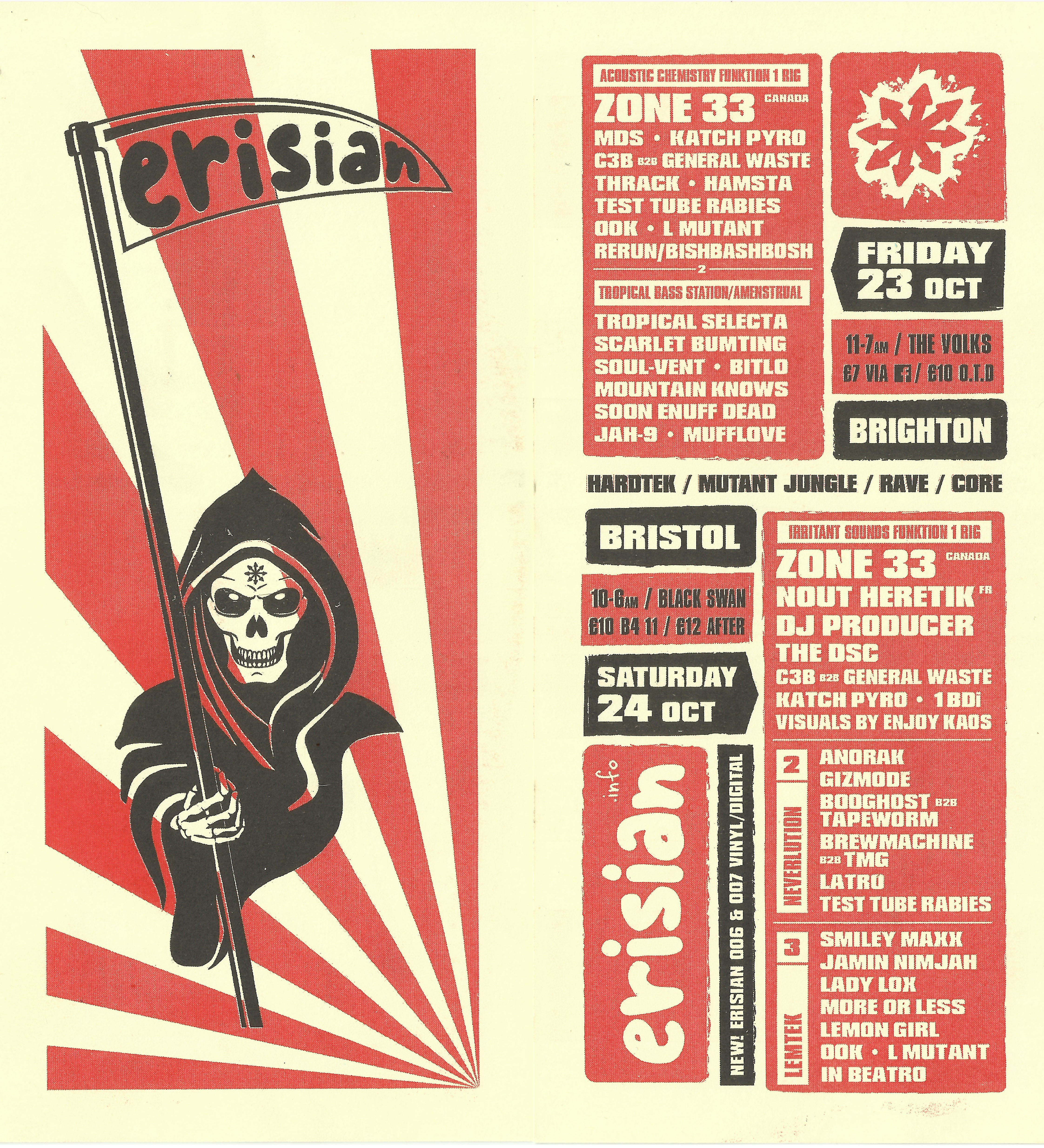 YES! This is happening! After a decade of rinsing the Volks in Brighton, the coastal chaos peddlers known as Erisian will be invading Bristol with a little taste of their discordian mayhem! We’re taking over the Swan, our home away from home in the South West, with a lineup full of hard rave legends.

The night before tearing up Bristol with our first night at the Black Swan, we bring you yet another extravaganza of coastal mayhem with this huge line up at the Volks.

ZONE 33 [LE DIABLE AU CORPS]
Catch Canada’s hardtek dons smashing the Volks up for the only Brighton date on their European tour.

SCAMP [LIFE4LAND]
Brace yourselves for some seriously rinsing dark DnB from the Life4land badman.

GENERAL WASTE & C3B [ERISIAN/CPR/AMEN4TEKNO]
The Erisian residents and Community Payback Records boys are back to get the room bouncing with a barrage of tuneful tekno tunes.

THRACKH [LEMTEK/RRR/LLTA]
A serious burgeoning talent on the scene – Thrackh brings those moody, hip-hop laced jungletekno bangers that churn up crowds into a fine paste.

HAMSTA [HODGEPODGE]
Half man, half rodent; fused together not through science but by an unholy fusion of breakbeats, hard kicks, rave stabs and dutty basslines. Hamsta stores badbwoy dubplates in his cheeks and will chew through the phono cables of any DJ foolhardy enough to challenge his soundz..OOK [ERISIAN]
Part of Erisian Ook will be mixing Jungle / Hardtek and Tek with a touch of Ragga, Gypsy and Hip Hop thrown in the mix.

L MUTANT [ERISIAN]
Part of the Erisian crew, L Mutant will be spinning some face scrunching jungle… soaked in amens.

Two of our favourite crews will bring their brands of break fuelled debauchery to the downstairs as only they know how.

ZONE 33 [LE DIABLE AU CORPS]
Catch Canada’s hardtek dons smashing the Swan up for the only Bristol date on their European tour.

NOUT HERETIK [LE DIABLE AU CORPS]
Founder member of Heretik Soundsystem and the creator of the revered Le Diable Au Corps label, this man has been a legend across Europe and key figure in the tek scene for more than a decade. Catch a dose of what he calls ‘Hardfloor Dancefloor’ in one of his very rare UK sets.

THE DJ PRODUCER [REBEL SCUM]
If you’ve been anywhere near the dirty end of techno in the past 20 years, you may know the name. We bring the hardcore techno legend back down the road to Bristol to do what he does best – tear the place apart.
THE DSC (ED COX & STIVS) [LIFE4LAND/DEATH$UCKER]
Two of Life4land’s top luminaries combine to give us a taste of fractured breaks, klezmer meets ragga melodies and thumping kick drums.
KATCH PYRO [LIFE4LAND/ERISIAN]
Katch Pyro is a cross between fire and melody, drum and bass, country and western, rock n roll, tropical dance music for any ears.GENERAL WASTE & C3B [ERISIAN/CPR/AMEN4TEKNO]
The Erisian residents and Community Payback Records boys love to make the Swan’s main room bounce with a barrage of tuneful tekno tunes.

1BDi [IRRITANT]
The Irritant head honcho and key early Erisian member is back to blare out tunes with the crew again. Just like old times.

One of our favourite Bristol crews will bring their brand of break fuelled debauchery to the upstairs as only they know how.

\ CORRIDOR  LEMTEK  POWERED BY KEEP IT DOWN /

Taking over the corridoor with sound provided by keep it down sounds; we will be rinsing out snare heavy jungle, foot stomping kick drums and good party vibes…and as standard Lemtek tradition; FREE CAKE

JAMIN NIMJAH
Part of Bass Bin Laden Sound System, Jamin Nimjah will be coming all the way from Scotland. Know for his mash of styles in both his tracks and his mixes Jamin can keep any crowd jumping, surprising the punters with unexpected treats and blends.

LADY LOX
Part of the lemtek and monkey dance fam, this junglist will be keepin it oldschool with a strictly vinyl set.

LEMON GIRL
Founder of lemtek and part of monkey dance, Lemon girl will be bringing a bag of tasty treats – cake, snares, bass and a few kick drums to mix it up

IN BEATRO
Part of the lemtek crew, in beatro will be smashing out party music from the deepest, darkest corners…expect jungle, dnb, bassline and anything else with a hard, heavy amen.

MORE OR LESS
Part of the monkey dance crew, this cheeky two will be playing an Amen mashup and a gypsy twist.

L MUTANT
Part of the Erisian crew, L Mutant will be spinning some face scrunching jungle… soaked in amens.

OOK
Part of Erisian Ook will be mixing Jungle / Hardtek and Tek with a touch of Ragga, Gypsy and Hip Hop thrown in the mix.